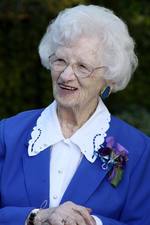 Mary Jane Stegmann, our dear Mother, grandmother, great grandmother, mother-in-law, sister and friend, passed away on January 19, 2019 at the age of 90. She is gone from our earth but will never be forgotten.

Mary Jane, always known as “Jane”, was born in Rockford, Illinois in 1928 to Theodore and Lucille Landgraf. They soon moved to Aurora, Illinois where she attended grade school and West Aurora High school. She attended one year of college at Knox College in Galesburg Illinois.

She was united in matrimony to Eugene Stegmann (Gene), on May 7th, 1949. She had three children, Jim, Joyce and Jerry and spent many years watching the boys play baseball and basketball, and leading her daughter's Girl Scout Troop at Our Lady of Good Counsel.

Jane worked for the Illinois school district as a secretary and was a room aid for many years at OLGC. She also worked retail at Ashulers in the ladies wear department.

In 1979, she lost Gene to cancer and relocated to be near her daughter in Onalaska, Wisconsin. She lived there the rest of her life working at both Community Credit Union and First Federal. Knitting was a true passion of hers. She knit baby blankets for grand and great grand babies as they arrived. She also spent many hours on the road traveling the United States from end to end, with her friend Bob.

Jane will probably be best remembered for her sweet nature and kindness to all, and her ever devoted love for her family.

She is preceded in death by a still born sister, her parents, sister Dorothy, and husband Gene. She is survived by her son Jim (Sheila) of Fairfax, Virginia, and children James(Catherine),and Jenna, daughter Joyce(Mike) of Onalaska Wisconsin, and daughters Jamie DesJardins(Matt) and Wendy Hessler(Michael), and her son Jerry(Selaine), of Sandwich Illinois, and children Selynda Kern(Ryder), Shauna Barding(Chad), and Sandy Henert(Cole).
Her brothers Ted(Pat) of Oswego, Illinois, and brother Don of Phoenix, Arizona. She was great grandma to Haley and McKenna DesJardins, Leah Jane, Patrick, and Anna Hessler, Madison Jane, Connor and Liam Kern, and Eli Barding with Baby Barding #2 and Baby Henert #1 arriving soon.

Jane is now joined with her good friend Bob and her husband Gene. A private family ceremony will be held in Aurora, Illinois. So many thanks go out to the wonderful staff at Hillview Nursing who gave her such good care in her final days.

Any donations could be made to the Onalaska Enhancement Foundation, Sculpture Project, and mailed to 415 Main Street, Onalaska, Wisconsin. 54650, in honor of Jane Stegmann.