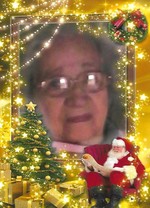 Cleobelle M. Bell, 87 of La Crosse died on Thursday, January 30, 2020 at Bethany Transitional Living in La Crosse. She was born on January 16, 1933 to John L. and Georgia K. (Reed) Pettygrove. She married Donald Bell on January 21, 1951 in La Crosse. Prior to Don’s death in 2007 they were inseparable and could be found at their weekly bingo games or on a trip to the casino.

Cleobelle is survived by 3 children: Judy (Tim) Cravens of Onalaska, Tracy (Fiancée Penny) Bell of La Crosse and Mark Bell of La Crosse; 7 grandchildren: Tim Bell, Wendy Cravens, Olivia Bell, Ashley Bell, Michael Bell, Jamie Bell and Keila Bell; a great-granddaughter Grace Bell and a sister Kay Bell King of Illinois. In addition to her parents and husband she was preceded in death by 2 sons Danny and Kerry Bell and 7 brothers and sisters.

No services are currently scheduled.